» Looking for a side dish to serve with your stuffed peppers? Here are a few great ideas.

I’ve enjoyed many Philly Cheesesteaks from the likes of Pat’s and Gino’s in Philadelphia over the years. It’s a true joy eating one of those sandwiches. The tender meat, the melted cheese, and the slightly crispy bread is just perfect. But without the bread, could I still enjoy a Philly Cheesesteak?

One of the first things I tried making when I switched to keto eating was a Philly Cheesesteak Stuffed Pepper. The flavors are all still there, just with a different delivery method. That works for me! These flavors work well as a Philly cheesesteak bowl and this delicious casserole.

What Ingredients Go In a Philly Cheesesteak?

A Philly Cheesesteak can include things like onion, peppers and mushrooms in the filling. The main staples are just thinly sliced beef, onions (if you like), and cheese (like Cheez Wiz, Provolone or American). You can also add mushrooms or hot peppers.

The ingredients we like to use are sliced sirloin steak, onions and Provolone cheese. Cheez Wiz isn’t the best product because it’s completely processed, but it only contains traces of carbs, so it’s fine to use, if you like.

The list of ingredients is relatively short which is another reason we love these peppers so much. Here’s a list of what you will need.

What Meat to Use

Any type of steak can be used in this recipe. I prefer sirloin because it’s more tender, but you can use round, flank steak or London broil. It’s more about how you slice the meat to make it as tender as possible.

I prefer that the meat is slightly frozen before cutting. This allows you to get it thinner than you could otherwise. And always cut against the grain of the meat.

It’s super important to have high-quality beef to make this recipe with. I’m a huge fan of the 100% grass-fed beef from ButcherBox. It’s a meat subscription box that’s delivered to your door monthly with the cuts of meat you choose. All the meat is humanely raised and never given antibiotics or added hormones. I appreciate the peace of mind that gives.

How Many Carbs in Bell Peppers

The bell peppers are just a vessel, so you can use any type you like. We prefer to use green bell peppers. One medium green bell pepper has about 6 net grams of carbs. The serving size of our recipe is one whole pepper. There are 7 net carbs in one serving.

The other net carb in this dish is from the onion, which can be left out if necessary. You could also eat just half a pepper, with more steak and cheese, to further reduce the carbs, if necessary.

If you want a sweeter tasting pepper, use the orange or red, however bear in mind that red and yellow peppers contain more carbs than green.

Start by cutting the peppers in half lengthwise and removing the seeds and ribs. Put the peppers in a baking dish and bake for about 8 minutes on 350 degrees F. This will allow the peppers to pre-cook.

While the peppers are cooking, grill up the filling ingredients. Slice up the beef and onions (and mushrooms, if you’re adding them) and cook them together on the stove top until the meat is nice and browned. The more seared you get it, the more flavor it has. Don’t forget to salt and pepper the mixture.

Pull the peppers out of the oven. Add a pinch of shredded cheddar cheese in the bottom and fill them up with the meat and onions. Place one slice of provolone cheese over the top of the pepper.

Bake the peppers for about 10 minutes, allowing the cheese to fully melt over the pepper.

Can I Freeze Stuffed Peppers?

Yes, you can freeze stuffed peppers. It is best to freeze them after they are fully cooked. Place them in a freezer safe dish and wrap up tightly leaving no surface exposed. You can also freeze them individually for a quick and easy lunch.

Do I Have to Pre-Cook the Peppers?

No, you don’t have to pre-cook the peppers. The finished peppers will be more firm and crisp when they are cooked. We prefer them softer so we pre-cook them in this recipe.

Can I Use Ground Beef Instead of Steak?

Yes, you definitely can replace the steak with ground beef. If that is your preference or what you have on hand. Cook it with the onions and mushrooms just the same as the steak.

Other recipes to try

What to Serve With Philly Cheesesteak Stuffed Peppers

Stuffed peppers are on the menu at least once a week. So, I am always looking for side dishes to serve with them. One-Pot Garlic Mushrooms and Cauliflower is fantastic. Grilled Radishes are are slightly sweet and a great substitute when you are craving potatoes.

For fresh salads try this Watermelon, Arugula and Feta Salad or Strawberry Spinach Salad. If you need more inspiration check out these great recipes. 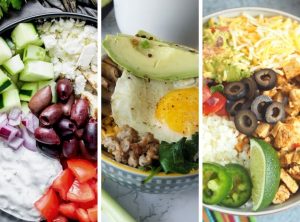 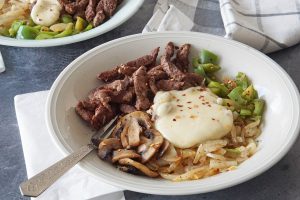 Keto Burrito Bowls Without the Tortilla 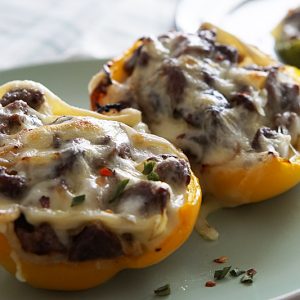