This Easy Keto Stuffed Eggplant is super tasty, quick to put together, and meatless, so this dish makes a great addition to your Meatless Monday rotation.

When you’re on a keto diet, since you can’t use bread or a crust, you’re always looking for new ways to package ingredients. Eggplant is one of the best vessels for keto cooking. We use them regularly, as well as peppers (taco stuffed peppers) and zucchini (stuffed zucchini).

Eggplants are the perfect vessel for keto meals because their flavor doesn’t overpower the ingredients and they hold up well in the oven. However, eggplant does have carbs. One whole large eggplant (unpeeled) has about 30 grams of carbs and 6 grams of fiber, so about 24 net carbs per eggplant.

The serving size of this dish is 1/2 an eggplant, but that’s still 12 net grams of carbs. To cut down on the amount of carbs in this dish, we remove the flesh from inside the eggplant, leaving just about 1/4 inch of flesh around the inside. That lowers the total net carbs to 7, making it within an acceptable range for a keto diet.

If 7 net carbs is still a bit too high for your diet constraints, you can remove another 1.5 grams of carbs by peeling the eggplant first.

These eggplants are stuffed with:

The stuffed eggplants in this recipe are meatless. However, if you want to mix it up, you can add ground turkey, pork or beef, if you want. It’s also great with pepperoni or chopped chorizo.

This is a great way to use the surplus of garden tomatoes. Just quickly blanch and peel the tomatoes first (it’s so much better without the peel).

You can also make it with canned tomatoes rather than fresh. If that’s all you have on hand, it’s perfectly fine.

How to Make Stuffed Eggplant

Since the eggplant takes longer than the rest of the ingredients to cook, the baking takes place in two parts.

Slice the eggplant lengthwise and scoop or cut out most of the insides, leaving about ¼” of flesh all around. To keep the carb count low, we don’t use the inside flesh in this recipe. You can save it for another use.

Rub the eggplant flesh with olive oil, sprinkle with salt and pepper, and bake it in the oven for 20 minutes.

As the eggplant is cooking, you can mix up the filling. In a large skillet, start by heating the rest of the olive oil, then sweating the onions over medium heat for about 5 minutes.

Add in the mushrooms, garlic, herbs, and eggplant flesh. Cook over medium heat until browned, about 5 minutes. Add the tomatoes. Continue cooking until most of the juice from the tomatoes has evaporated, about 10 minutes. Remove from heat. Add the mozzarella and basil to the filling and stir.

Return to the oven for an additional 20 minutes. You’ll know it’s done with the tops are browned and the filling is bubbly.

I like to garnish with some red pepper flakes and extra fresh basil. You can also add a sprinkle of grated Parmesan cheese if you want.

These Stuffed Eggplants can be made in advance. You’ll need to cook the eggplant for the first 20 minutes, then allow them to cool before stuffing with the filling. At this point they can be put in the refrigerator for up to 24 hours.

You can also freeze them at this stage. When you’re ready to eat them, just remove them from the freezer and bake them in the oven for 25-30 minutes. There’s no need to thaw them first.

I don’t recommend reheating it in the microwave, because they’ll become soggy and watery after frozen.

This Keto Stuffed Eggplant is one of my favorites, but we have a lot of other keto recipes to check out. Be sure to try the recipes below, as well as others you might like (just use the search bar at the top of the site to look for recipes you’ll love).

Should I peel the eggplant?

You should leave the skin on the eggplant when baking it. This is because the skin helps keep the shape and integrity of the “vessel” as it cooks. Without the skin, the eggplant would get mushy and the vessel would fall apart.

Do I use the whole eggplant?

Most eggplants are quite large, so you won’t want to use an entire half of a large eggplant for this dish. If you can find baby eggplant, that is the best option, as they are smaller. They might be oblong (like the ones in our pictures) or they might be more round.

While there are carbs in eggplant, that doesn’t make it bad for you. Baked eggplant can be quite healthy. Eggplant is a high-fiber, low-calorie food that is rich in nutrients and comes with many potential health benefits. You do need to eat it in moderation, if on a low-carb diet.

It’s also important to note that eggplant is a nightshade vegetable that can cause potential allergic reaction or other symptoms for some people who are sensitive to it. 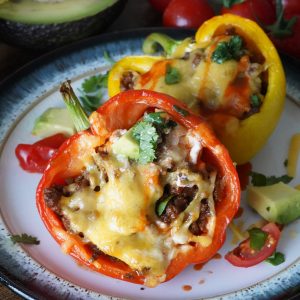 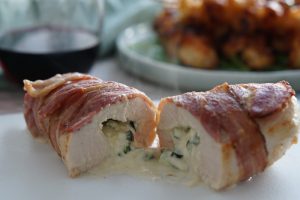