These Low-Carb Spinach Balls combine spinach with almond flour, egg, Parmesan cheese, and spices to make a keto friendly, low-carb snack or meal that is both healthy and delicious.

If you’re laying off the carbs but you still want something flavorful and delicious to snack on, it’s definitely time to try these delicious, cheesy spinach balls.

Spicy spinach balls are the perfect finger food. They have a nice texture and are full of flavour. They taste great with a keto Ranch dipping sauce or a low-carb tomato sauce.

This recipe is really simple and it will take you no more than 20 minutes from start to finish. It is also a great way to get your kids involved in cooking.

If you’re counting your carbs, you’ll be delighted to know that there are only 3 net grams of carbs in each serving. There are a total of 7 grams of carbs, with 4 grams of fiber.

How to Make Low-Carb Spinach Balls

Preheat the oven to 400°F (200°C) and line a baking sheet with parchment paper or a silicone mat.

Pour 1 cup of water into a saucepan. Heat until it reaches a rolling boil. Once boiling, add the spinach leaves and cover for 2 minutes.

After 2 minutes, rinse the spinach in cold water. Squeeze the excess water out with your hands or using a piece of cheesecloth. Cut the spinach into small pieces.

Stir the rest of the ingredients in a bowl until combined. I usually mix the dry ingredients first, then add the eggs.

Mix in the spinach and stir to form a dough. If the dough is still wet and won’t roll itself, add a little bit more almond flour. You can also use low-carb bread crumbs instead.

Roll into small balls to make about 18-20 and put them on the baking sheet with space in between. To get perfect portions of spinach balls each time, I use an ice cream scoop. Lastly, bake for 20-25 minutes until they’re golden brown and crispy.

These spinach balls should be eaten within 3 days if stored in the fridge, but can also be frozen for up to 3 months. You can freeze them either before or after you’ve cooked them. If you plan to cook them later, freeze them uncooked.

Place the balls on a plate lined with parchment paper, leaving some space in between so they don’t stick together. Put the plate in the freezer for about 15 minutes.

Once they are firm, transfer the balls to a plastic container to put in the freezer. They won’t stick together since they are individually frozen. You can also put them in a resealable bag in the freezer and just pull out what you need.

How should I defrost the spinach balls?

If you’ve frozen your spinach balls, there’s no need to thaw them before you put them in the oven. Just place them on a baking sheet, as per the recipe instructions and cook as usual. They will just need a few minutes longer to cook through from frozen.

Can I cook them in the air fryer?

Yes, you can cook these in an air fryer. To make sure they turn out crispy, cook them in a single layer, not touching each other. Cook on 400 degrees F for 12-15 minutes, turning halfway through.

What flavour of sauce do you suggest pairing these with?

You can dip them in a keto pizza sauce, ranch dressing, blue cheese dressing, or just eat them on their own. You can also make a more substantial meal by serving them over cauliflower rice. 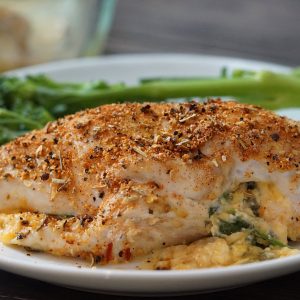