When you’re on a keto or low carb diet, you’re looking for a dessert you can have that tastes great but doesn’t have all that sugar. This Keto Coffee Ice Cream is exactly that. It’s made with cream, eggs, and substitute sugar.

If you’re tired of skipping the ice cream because it’s so packed with sugar, you no longer have to. This keto ice cream recipe is a great base for whatever type of ice cream you want to make. Today we’re making coffee flavor!

We use our ice cream maker for this recipe, so be sure to put the barrel in the freezer a day ahead so it’s good and frozen by the time you want to use it.

This ice cream uses a custard base, so it has egg yolks in it. If you don’t want to add any eggs, or you don’t have an ice cream maker, you won’t be able to use this recipe.

Note: I use allulose as a sugar substitute in this recipe for a very specific reason. It doesn’t harden as much as others, like Swerve, monkfruit, Erythritol or Xylitol. It’s really up to you which one you use, but do be forewarned that the final frozen version will be unscoopable.

How to Make Coffee Ice Cream

Although we add coffee to this ice cream recipe, we use this same base for all of our keto ice creams. You can make any flavor of ice cream you want. It’s an easy base and it tastes great and very creamy.

The other great part about using this base for everything is that it starts to become second nature to make it. There are quite a few steps to making custard-style ice cream, but it’s not hard, and it’s very much worth the effort.

Step One: Heat the Creamy Mixture

In a saucepan over medium heat, combine one cup of the cream, salt, and half the sugar. Stir the mixture constantly as you bring it just to a simmer. Remove from heat.

In a small bowl, whisk together the egg yolks and the remaining sugar just until combined.

You need to temper the eggs, so they don’t cook. Tempering is just bringing the egg mixture up to a higher heat in a slow way so the egg doesn’t cook from flash heat. It will be easier to temper the eggs if you have allowed the eggs to come to room temperature before you started.

Slowly stir 1/2 cup of the cream mixture in a drizzle into the egg mixture. If you do this slowly enough, the eggs won’t begin to resemble scrambled eggs.

Pour that egg mixture back into the saucepan with the rest of the creamy mixture. Heat over medium heat for another 3-5 minutes, stirring occasionally. Do not boil the mixture. If the mixture gets too hot and boils you could end up with scrambled eggs.

Remove the pot from the heat.

Pour the mixture into a heat-proof bowl. To avoid putting the hot mixture in the refrigerator, you can chill the bowl over another bowl filled with ice for 10-15 minutes to cool it down first. Just get a second bowl that’s similar size or larger than the one your mixture is in. Fill it with ice and set the bowl with the custard over it. When it’s cooled down a bit, refrigerate it for about two hours, until it’s cold.

At this stage, I make a shot of espresso to add to the ice cream. It needs time to cool, so making it now will give it time to do so. You don’t want to use a coffee that’s especially bitter, so go with a smooth light blend. You can also make regular coffee. You’ll just need 1 fluid ounce. Once made, put the coffee in the refrigerator to chill.

After the mixture has completely cooled, stir in the rest of the cream, the chilled coffee, and coffee powder. Stir it well, until the coffee powder is dissolved. Pour the mixture into your ice cream maker, and churn according to the manufacturer’s directions. For mine, it takes about 45 minutes to firm up. It might be more or less for you.

What Makes This Keto?

One of the major drawbacks of regular foods like ice cream for a keto diet is that they are packed with sugar. The non-keto version of this ice cream is the same, only it uses 1 cup of regular sugar, which results in a lot of extra grams of carbs from the sugar and makes it not keto friendly. In this recipe, we exchange the regular sugar for the sugar substitute, allulose.

We also use whole cream in this recipe. Milk has high amounts of sugar in the form of lactose. Compared to cream, milk has higher amounts of lactose. Cream also has more fat content than milk, making it a better alternative for a keto diet.

Does this ice cream have to be made in an ice cream maker?

However you can still make it without an ice cream maker. At the end, mix in only half of the heavy cream and reserve the rest. Pour the mixture into ice cube trays and freeze until solid. When ready to eat, add the ice cream cubes to the blender with the remaining heavy cream and blend until smooth.

Do I have to add eggs to the ice cream?

Eggs add flavor, prevent ice crystallization, and create a smooth and creamy texture, so they are an important ingredient for delicious ice cream. You can make ice cream without eggs, but not with this recipe.

Do I have to use allulose?

You don’t need have to use allulose as your sugar substitute, but you will definitely want to if you like creamy scoopable ice cream. I’ve tried making ice cream with many different sweeteners and they all turn out rock hard, except for allulose. 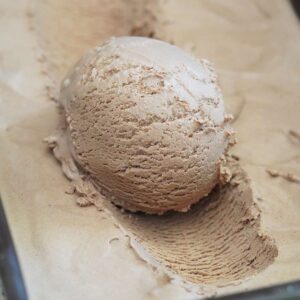 When you're on a keto or low carb diet, you're looking for a dessert you can have that tastes great but doesn't have all that sugar.
5 from 32 votes
Print Rate
Course: Dessert
Cuisine: American
Keyword: coffee, ice cream
Prep Time: 10 mins
Churn Time: 20 mins
Total Time: 30 mins
Servings: 8 Servings
Calories: 333kcal
Author: Laura