Keto Cauliflower Pizza Crust is a healthier alternative for your pizza craving, and with only a few net carbs per slice.

We switch between making this Cauliflower pizza crust and the popular Fathead pizza dough, which uses primarily mozzarella and almond flour. I have to give the slight nod to this cauliflower crust though, because it uses a lot less cheese and is lighter than the alternative. No matter what, we always make our own keto pizza sauce, as well, to be sure it’s low in sugar.

This crust only uses cauliflower, egg, a little bit of cheese, and some spices, so you don’t have to feel guilty when you pile extra cheese on the top!

Load it up with your preferred toppings, and you’ve got pizza night taken care of.

As mentioned, you need just 3 main ingredients for this crust, plus any seasonings you wish to add.

How to Make Cauliflower Pizza Dough

Just like with regular pizza dough, there is some preparation required in making this dough. The most time intensive of these tasks is the cauliflower.

While it’s definitely faster to use pre-riced cauliflower, it’s not a huge chore to make your own, especially if you have a food processor. You can process the cauliflower in just a few minutes.

I’ve even grated cauliflower on a cheese grater before for this recipe. If all else fails, you can cut it into small pieces and use a chef’s knife to mince it.

Next you need to cook the rice. It’s fastest to microwave it for about 8 minutes on high. If you’re using store-bought riced cauliflower, you can steam it in the bag in the microwave. You can steam or boil it in a pot on the stovetop, or even spread it out on a baking sheet and bake it for about 15 minutes.

When the rice is cooked and cooled, pile it up on a piece of cheesecloth or a thin tea towel. Pull the corners up to make a little pouch and squeeze the water out. Quite a bit of water will come out of it, so don’t stop squeezing too quickly. The drier, the better.

Add the dry cauliflower, mozzarella cheese, egg and seasonings to a bowl. Stir it together. It will still be a bit wet and doesn’t really resemble a “dough”. That’s how it should be.

Pour the dough onto the parchment paper and use your hands to press it down into a round crust shape. You can make it as thick or thin as you like. I think it’s perfect at about a 1/4″ thickness. It gets crispy and has a better texture when it’s thin.

Bake the crust for about 25 minutes, until browned slightly on top. Flip the crust over. Then add the toppings of your choice and return to the oven for another 8-10 minutes.

Tips for Making the Best Crust

Can you eat a cauliflower pizza crust on a keto diet?

Yes, definitely. The ingredients in this pizza crust are all keto friendly. A slice of this crust has just 2 net grams of carbs. Whether it fits into your diet comes down to how many carbs remain in your daily total, so be sure to calculate the full day to decide if a slice or two fits into your macros.

What is the secret to a crisp cauliflower pizza crust?

In order to get this crust crispy, you need to remove as much of the water content from the cauliflower as possible. That means squeezing out the water until a dry paste remains. If your crust isn’t getting crispy, it’s usually due to not cooking the cauliflower enough so that the maximum water can be squeezed out. 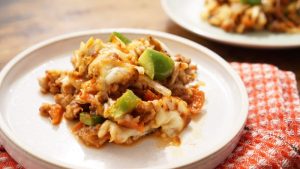